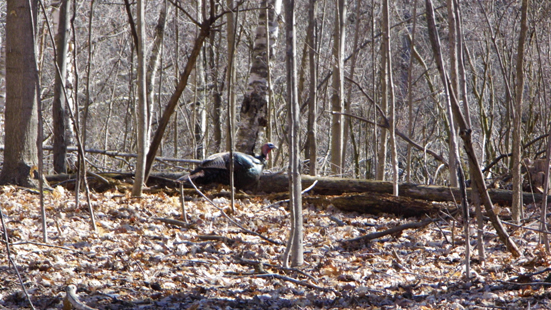 I've been a big fan of spring turkey hunting here in Michigan since my first hunt back in 1989. Things were a bit different back then. The number of birds was considerably less than today. Most of the hunting was done in the northern part of the state and the only tags available were thru a lottery draw system. It was a big deal back then to draw a tag since there were many more hunters than available tags.

My first hunt was up in Roscommon County, near Houghton Lake. A hunt that almost wasn't. A guy I was bowling with at the time and I put in for the tags on a whim. He knew quite a bit about the area, but neither of us had a clue what hunting turkeys was really about. We both spent some time reading up on the hows, whens, and wheres, never really knowing if we'd get a tag. I bought a series of cassette tapes to listen to the "experts" calling tips. Then spent days working with a Quaker Boy box call I'd found at a local sporting goods store trying to sound something like the guys on the tapes. I even bought a couple diaphragm calls and after alot of trying got so I could even get those to sound pretty good.

Amazed we were when a post card from the DNR showed up in our mailboxes saying we'd been successful at drawing our tags for the coming 1989 spring turkey season. Anticipation was in high gear after that. We had many a road trip to Houghton Lake that late winter, scouting out a place to chase turkeys. Heck the woods were still covered in a couple feet of snow but that didn't dampen our enthusiasm. Things however changed considerably when my hunting partner called to say his work schedule had changed and he was not going be able to go that spring. Quick phone call to my dad to explain the situation and he was on board to come along for the ride. Once the snow melted off and the mud dried up in the turkey woods my mom and dad spent hours driving the wooded trails in the state forest south of Houghton Lake looking for both birds and sign. Every time they returned from another ride we got together to go thru their notes and listen to the stories. Although dad wasn't going to be hunting he was all in on the process.

It seemed like forever before my season arrived. We finally loaded up the F150 with our gear and headed north to try my luck. The first morning found us parked at the intersection of a couple sand trails about 6 miles south of Prudenville, well before daylight. Eventually the sun started to lighten the eastern horizon and I just couldn't wait to get to working that box call. Around 5:30AM, still mostly dark, I eased out of the truck and rattled off a long series of yelps on the box. Dad and I stood there in the darkened silence straining our ears for a gobble, but nothing. So I let loose again and was met with silence. Our egos a little deflated we climbed back in the truck ate a couple more donuts and pondered what was next. I finally climbed out again around 7AM, now full on daylight and let er loose on the box call again. This time things were much different. Not only did we hear a gobble, but no less than a half dozen birds responded to my calls all from different directions. It was full on craziness for the next 5 minutes as we scrambled to get our gear and get in the woods.

I made the call on where we'd go and we headed out 50 yards in front of the truck on an old logging trail and sat down against a big oak. Dad found a seat on top of stump about 50 feet from me. Once we were settled in I tossed the diaphragm call in my mouth and sent off a series of yelps. Immediately the woods erupted with gobbles seemingly everywhere, the closest I figured about 100 yards out. I strained my eyes and ears trying to get a bead on where the tom was located. Seconds of silence went by so I cut loose again on the call. Suddenly, I noticed my dad was attempting a s-l-o-w slide off the stump and was pointing off to my left. I slowly brought the old 870 up to my knee and pivoted ever so slowly to my left. Couple seconds later I see a red and blue head peering thru the branches of a small thigh high pine sapling. I nestled my cheek unto the shotgun stock and drew a bead on the bird. Took him a few more seconds to clear the sapling. Once I had a clear view I squeezed the trigger …………… and my hunt was complete. There flopping in the leaves was my first wild turkey gobbler. Dad and I jumped up and scooted over to the bird. As I remember, we both stood there for a couple minutes looking at bird and each other. It was quite a moment. Then the high fives and hugs were in order.

2021 Another Busy Year in Land Sales

If you've been looking to buy a piece of hunting land this year it comes as no surprise the market was beyond busy.

Spring is right around the corner and with it comes turkey season and morel mushroom season.

I've been a big fan of spring turkey hunting here in Michigan since my first hunt back in 1989.

Hey there folks we are in serious need of some Michigan hunting land listings.

New Hunting 4 Land YouTube Channel is Up and Running

Wanted to let everybody know I now have a You Tube channel.